Welcome to part two of my three-part tutorial on writing plugins for remark and gatsby-transformer-remark. In part one, we created the well-tested functionality to fetch content from GitHub. In this part, we’ll look at Abstract Syntax Trees (ASTs) and explore some of the fun things we can do with them.

Practically speaking, an AST represents a piece of source code written in a particular language as a tree structure in which each node represents a language feature (variable definition, function call etc). This tree structure is produced by a parser based on that language’s grammar. A language can have multiple different AST formats and, conversely, multiple languages can share the same AST format. Here are a few examples:

To get a hang of ASTs, I’ll visually show you a simple AST with a fabulous tool called AST Explorer. Paste some code (JavaScript, TypeScript, Markdown etc) into the left panel and it’ll parse that code and show you the corresponding AST in the right panel. You can click on any text in the left panel and the corresponding AST node will be highlighted in the right panel (and vice versa). Coincidentally, because AST Explorer uses remark to parse Markdown, its output will help us keep a mental model while manipulating Markdown ASTs later.

Let’s look at the AST for a simple Markdown snippet

In the corresponding AST, we can see that the free-form text has been parsed into a tree structure that captures our intuitive understanding of how various Markdown formatting features translate to visual output. Here are a few examples:

You’ll see that most formatted texts have text nodes as their terminal children. text nodes are leaves in the tree, meaning they have no children.

We expect # Hello to be rendered as a h1 heading. Indeed, its corresponding AST node has a type of heading and depth (or level) of 1.

We expect the code snippet to be rendered as a JavaScript code block and, indeed, its AST node has the type of code and lang (language) JavaScript.

Feel free to play around more with this tool. If you want to dig deeper, the MDAST specification contains information about all the possible types of and relationship between nodes that remark can understand natively.

Let’s take a short detour and talk about the structure of a remark plugin. remark is really just the scaffolding on which plugins do their jobs. remark’s core handles conversion between plain text Markdown sources and ASTs while all AST manipulations are performed by plugins.

The top-level export of a remark plugin must be a function, called an attacher, that can accept configuration options for that plugin from the user. The attacher can perform some initialization based on these options and then return another function, called the transformer, which will perform all the heavy lifting. During program execution, the transformer will receive the Markdown AST and mutate it (e.g. add/remove nodes, change node types etc) to achieve the desired output. Although we’ll only examine how plugins can transform ASTs, they can also add new syntactic constructs to Markdown or new types of output (e.g. HTML).

For example, here is a bare bone attacher:

and a no-op transformer

To warm up, let’s perform a simple transformation: replacing occurrences of the paragraph GITHUB-EMBED in the following input

with the following short code snippet: 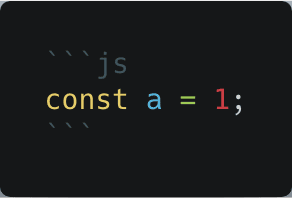 in order to get this output: 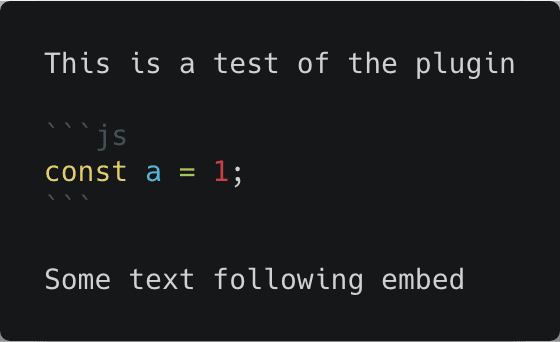 Because ASTs can be a bit difficult to think about, a useful trick I usually employ when working with them is just to copy-paste the Markdown input and desired Markdown output into AST Explorer and compare them to determine a reasonably simple way to change the former into the latter. By doing this, I can see that I need to transform this AST node:

into this AST node:

Thus, our plan is to visit every node in the AST and whenver we encounter a paragraph node whose content is the marker GITHUB-EMBED, we change the type of that node into code, unset the children key and add two new keys: lang with the value js and value with the value const a = 1;. The following transformer accomplishes that goal:

Note that instead of hard coding the embedding marker to be GITHUB-EMBED, we’ve made it a configurable option marker. Instead of traversing the AST manually, we use the utility package unist-util-visit (provided by remark). Its main export (the visit function) takes three arguments: an AST to traverse, a condition (such as the node type paragraph in this case) and a callback to invoke if a node matches that condition. This is the visitor design pattern in action. All AST-parsing libraries I’ve seen so far (remark, eslint, babel etc) provide utility packages to traverse the ASTs they produce e.g. babel-traverse by Babel.

Side note on testing

One common way to test code transformers, such as the one we’re writing, is to store each pair of input and expected output as separate files within a directory (called a test fixture) and then programmatically generate tests from each directory. For example, to test the transformer we have created so far, we create the following simple-example directory inside __fixtures__:

where input.md and expected.md are the Markdown input and expected Markdown output, respectively, taken from above. options.js contains the configuration for the transformer (in this case, setting marker to GITHUB-EMBED) and “simple example” is the name of this test fixture. The plumbing to convert these fixtures into tests is in the file src/__tests__/transform.js if you’re interested.

After this step, the repo should look like this. When you git checkout that commit and run npm run test, the tests should pass, indicating that the actual output of the plugin matches the expected output.

Feel free to play around with the input, expected output, options and transformer code. For example, can you try a new marker phrase or make the plugin transform the marker into a different code snippet while still keeping the tests pass? If you set marker to be GITHUB_EMBED, what happens? What constraint does that put on possible values for marker?

Now that we’ve gotten a hang of transforming ASTs and testing those transformations, let’s try to apply those skills to our current use case. We want to target our transformation at URLs sandwiched between embedding markers of this form

and replace them with the toy JavaScript snippet above (const a = 1;) while avoiding false positives. For example, in this sample input:

only the first paragraph containing GITHUB-EMBED should be replaced by the code snippet while the latter two should be left alone because one of them doesn’t contain a URL and the other contains only one marker: 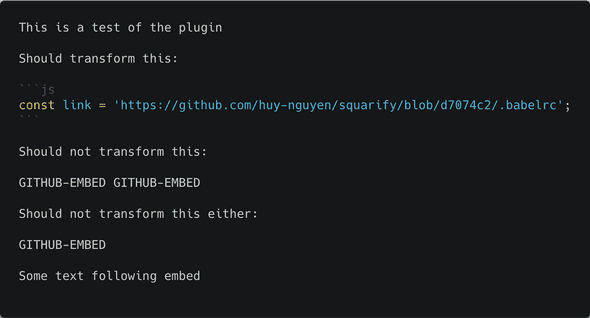 We will again use AST Explorer for guidance. After pasting the sample input into AST Explorer, we can see the difference between our target:

and the two potential false positives:

From this exercise in compare-and-contrast, we can reasonably conclude that we need to transform paragraph nodes that have three children, of which:

Based on the above three conditions, we can write a function checkNode to check whether a paragraph node is a candidate for transformation:

and use this checker to guard against false positives in our transformer:

After this step, the repo should look like this. The tests should pass, indicating that our detection works as expected.

I think we all want syntax highlighting for our new embedded code blocks. Additionally, it would also be nice to be able to embed only a subset of lines from a GitHub file. After some consideration, I decided to make it as simple as possible to specify the language for an embedded code block The language name should come after the URL (but still stays within the two embedding markers) and is separated from the URL by whitespace like this:

The user can additionally specify that only a subset of lines from the GitHub file should be embedded. For example, the following embedding will only insert line 1 and lines 3 through 5 into the output code block.

I chose this numeric range notation because it’s used to specify which pages should be printed from the print dialog of many operating systems and software, thus making it immediately familiar to a large number of users. Additionally, there’s already an NPM package to parse this notation for us: parse-numeric-range.

We can now incorporate these new requirements into our test input: 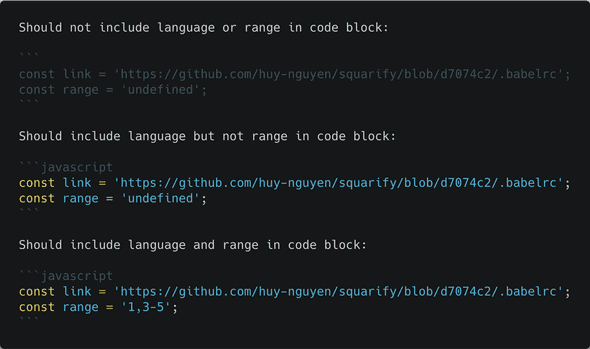 Note that we include the expected line range inside the expected output code blocks (e.g. const range = '1,3-5') to visually demonstrate that if the tests pass, we have correctly extracted the line range from within the embedding markers.

Having the test in place, we can update the checkNode function to be able to detect these extra use cases by detecting the number of whitespace-delimited entities between two embedding markers:

Once a node satisfies the checkNode function, we need to set the lang property on the code block and insert the line range into the code block:

After this step, the repo should look like this. Running npm run test should show all tests passing.

So far our tool is pretty rudimentary but has correctly performed the tasks we asked of it. In my experience with writing code transformers, it’s best to start simple and avoid over engineering, then slowly add more complex test cases later.

This is the end of part two of my tutorial. Click here for part three.